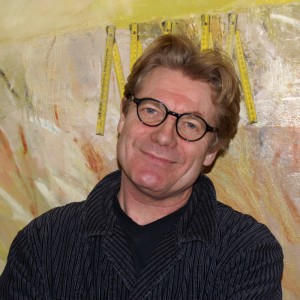 Set Design: After a brief dancing career he started working in set design in 1976. He initially designed for ballet, working with prominent choreographers such as Jiri Kylian and William Forsythe. But soon after that he had worked for all the major dutch drama companies and more recently for various theatres outside Holland including Schaubühne Berlin, Münchner Kammerspiele, Bayrisches Staatsschauspiel München, Volkstheater Wien, Renaissancetheater Berlin and many other European theatre and opera companies. The most important drama directors he worked with include Erik Vos, Antoine Uitdehaag en Johan Doesburg.

In 2009 he won an Alfréd Radok Award for the best scenography in the Czech Republic.

Tom Schenk has illustrated and/or designed the appearance of several theatre related books in the Netherlands, including the complete theatre encyclopedia Theatres in the Netherlands since the seventeenth century. His first illustrated children's book Lukas und Lili has been published in spring 2011, three more books are in preparation.

His design drawings for sets and costumes have developed into works of art in their own right. There have been several exhibitions of his drawings and paintings regularly since the mid-eighties.

Around 2018 he started to focus more and more on painting. His first solo exhibition in February 2020 (at the Royal Theatre in The Hague) was a great succes. His next big exhibition is scheduled for January 2022 at the prominent Dutch painters society Pulchri Studio